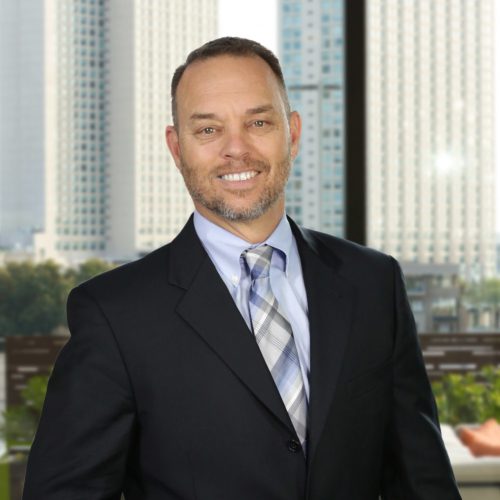 Mr. Johnson is one of the founding partners of Johnson Fistel and has more than twenty-seven years of experience as a trial attorney focusing on complex civil litigation.  Prior to starting his own law firm in 2004, Mr. Johnson was a partner in the law firm Sheppard, Mullin, Richter & Hampton, LLP, a full-service Global 100 law firm with over 1,000 attorneys in 15 offices located around the world.

While at Sheppard Mullin, Mr. Johnson represented some of the largest companies in the country in complex business disputes conducting trials in state and federal court.  He brings this “Big Law” experience to his current practice where he can offer the efficiency and personal touch of a smaller law firm.  With the trust and confidence of his colleagues and clients over the past 18 years, the law firm that Mr. Johnson started with just one lawyer has now grown to a full-service law firm with 15 lawyers and offices in California, Georgia, and New York.

Mr. Johnson has also continued to represent individual clients and small companies through jury verdicts in complex civil litigation.  By way of example, in Healthy Life Marketing, LLC, et al. v. Jaime Brenkus’ Sound Body, Inc. (San Diego Superior Court), Mr. Johnson helped his client recover a seven-figure verdict following a week-long jury trial.  See testimonial from the firm’s client under Testimonials.  Similarly, in DCI Solutions v. Urban Outfitters (S.D. Cal), Mr. Johnson served as lead trial counsel for a small local consulting firm in a case against one of the nation’s largest clothing retailers in a matter that would have forced the company into bankruptcy if it lost.  Following a week-long trial in federal court, the jury returned a verdict rejecting the retailer’s $1.5 million damage claim in its entirety.

In addition to his complex civil litigation practice, Mr. Johnson has served as lead or co-lead counsel in scores of representative matters (class actions and derivative actions) throughout the country, including: In re Motorola, Inc. Derivative Litigation, (Ill. Cir. Ct. Cook County) (derivative action settled after six years of litigation on terms that required the implementation of comprehensive corporate therapeutic changes valued by one expert at over $1 billion); In re the Titan Corp. Derivative Litigation, (San Diego Superior Court) (derivative action resulting in $29 million in increased consideration to Titan’s shareholders in the all-cash merger acquisition); Bagot v. Bracken, et al., (Tenn. 6th Cir.) (derivative action resulting in a payment of $19 million to the company, believed to be among the largest recoveries in a derivative case in the State of Tennessee, and implementation of significant corporate therapeutics); Englehart v. Brown, et al. (Wash. Super. Ct. King Cnty) (shareholder class action resulting in what is believed to be the largest recovery ever obtained in a class action challenging the price of a merger or acquisition of a public company in a Washington court, $12.75 million additional consideration for class members); and Baker v. Visa International Corp., (San Diego Superior Court) (consumer class action against Visa for wrongfully assessing undisclosed fees by manipulating the currency conversion rates when consumers used their Visa Card for purchases in other countries and ultimately coordinated with In re Currency Conversion Fee Antitrust Litigation which resulted $336 million for the class members).

Mr. Johnson’s practice focuses on complex litigation.  Mr. Johnson has extensive experience in all aspects of trial practice, mediation, trial preparation, and non-jury and jury trials in state and federal court.  In addition to his general trial practice, Mr. Johnson has both prosecuted and defended a number of cases involving securities fraud in class actions and derivative cases.

Mr. Johnson was admitted to the State Bar of California in 1994.  He is currently admitted in good standing with the following courts:

Mr. Johnson is currently, or has been previously, a member of the following professional organizations:

Following graduation from law school in 1994, Mr. Johnson served as a judicial law clerk for one year for the Honorable John S. Rhoades, a federal trial judge in the United States District Court for the Southern District of California.

Mr. Johnson completed Yale School of Management’s Certified Private Wealth Advisor® (CPWA®) curriculum and obtained the CPWA® certification administered by Investments & Wealth Institute® in 2021.  The program includes a series of advanced financial advisor courses presented by leading Yale faculty and industry experts covering the most advanced knowledge and techniques to address the sophisticated needs of high-net-worth clients with a minimum net worth of $5 million.  Mr. Johnson received his Juris Doctor degree from Washington University School of Law in 1994, where he was in the top 10% of his class while in attendance.  At both Washington University School of Law and the University of San Diego School of Law (where Mr. Johnson was a visiting student in his third year), Mr. Johnson won first place awards in each school’s Moot Court Competition.  He received his Bachelor of Science degree in Business Administration with an emphasis in Finance from San Diego State University in 1990, where he graduated second in his class major, with honors and summa cum laude.

Mr. Johnson serves on the Board of Governors for the San Diego Chapter of the Association of Business Trial Lawyers.  For the past several years, Mr. Johnson has spearheaded his firm’s efforts to be the leading fund raiser for Feeding San Diego’s annual challenge to help fight summer hunger throughout San Diego County.  Mr. Johnson also donated time with several members from the firm to organize food for distribution to the needy.  Also, for several years, Mr. Johnson served as a volunteer at Voices for Children, where he acted as a CASA (Court Appointed Special Advocate) meeting several times each month with a foster child and attending court hearings to advocate for the child’s best interests.

Mr. Johnson has been recognized as one of San Diego’s top lawyers by a number of third-party sources based upon peer reviews, including the following: 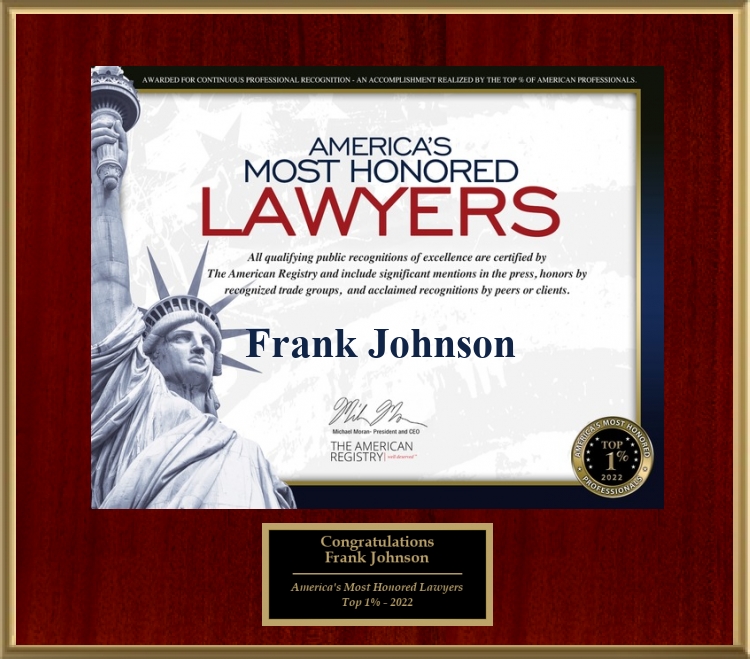 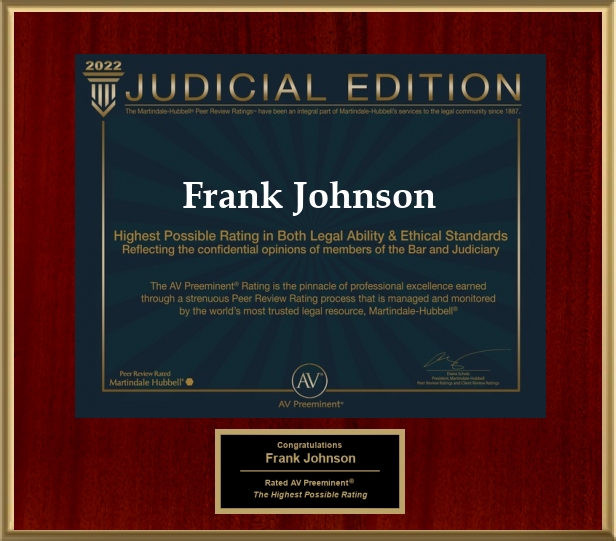 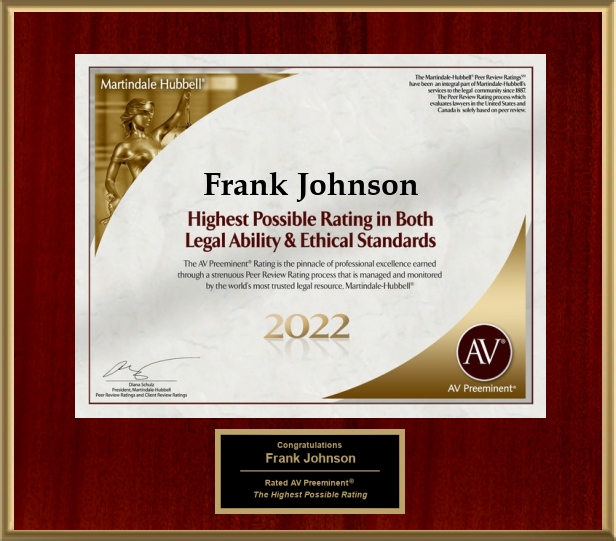 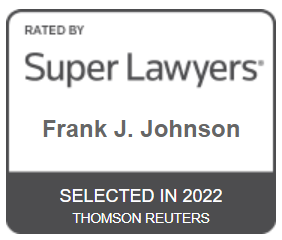 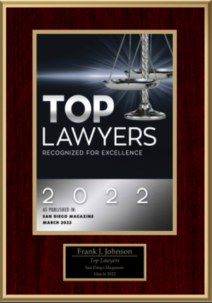 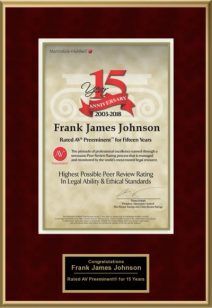